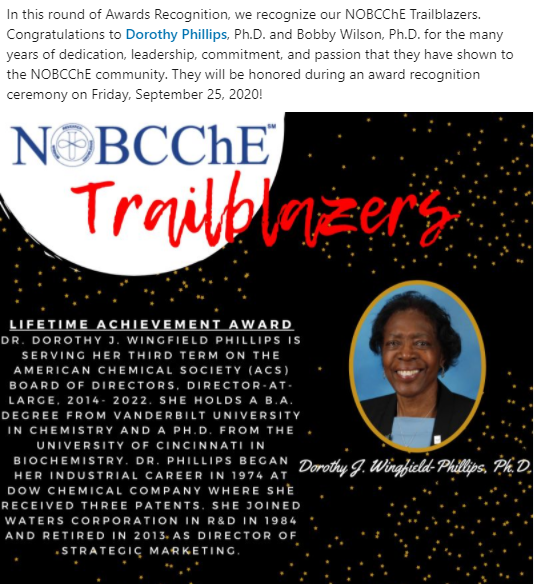 Dr. Dorothy J. Wingfield-Phillips is serving her third term on the American Chemical Society (ACS) Board of Directors, Director-at-Large, 2014-2022. She holds a B.A. degree from Vanderbilt University in chemistry and a Ph.D. from the University of Cincinnati in biochemistry. Dr. Phillips began her industrial career in 1974 at Dow Chemical Company where she received three patents. She joined Waters Corporation in R&D in 1984 and retired in 2013 as Director of Strategic Marketing. Dr. Phillips as honored by Vanderbilt University as a member of its 2019 Class of Trailblazers; she was the first African American woman to receive and undergraduate degree from the college of Arts and Sciences in 1967. Her commissioned portrait hangs in Kirkland Hall. Among her other honors are the Vanderbilt University Dorothy J. Wingfield Phillips Chancellor’s Faculty Fellowships, 2017 (faculty Drs. Renã Robinson and Audrey K. Bowden); American Chemical Society Fellow, Class of 2010; Distinguished Chemist Award, The New England Institute of Chemists, Division of the American Institute of Chemists, 2011, Waters Leadership Award, 2008; Northeastern Section Henry A. Hill Award, 2006; Distinguished Alumni, University of Cincinnati McMicken College of Arts and Sciences, 1995, and Center for Women Studies, 1993. Vanderbilt University presents annually the Dr. Dorothy Wingfield Phillips Award for Leadership to a graduating African American senior in recognition of the student’s outstanding accomplishments. Dr. Phillips represented the ACS Board of Directors as a VIP guest at ChemIndix 2019 in Manama, Kingdom of Bahrain, Saudi Arabia. She is a co-editor and a co-author of a chapter in Responsible Conduct in Chemistry Research and Practice: Global Perspectives (2018) as part of the ACS symposium book series. Dr. Phillips is featured in African American Women Chemists in the Modern Era by Jeanette E. Brown (2018). She is a member of the National Organization for the Professional Advancement of Black Chemists and Chemical Engineers (NOBCChE), the AAAS Science and Human Rights Coalition and its Steering Committee, and Alpha Kappa Alpha Sorority, Inc. Her late husband, James E. Phillips, was a chemist and an ACS volunteer. They have three children and grandchildren.